It's officially October!
Let's get spooky!


Posted by Cinema Slime at 4:45 PM No comments:

Horror Movie Tag - Get To Know Me


Saw a youtuber do this and thought I'd join along here on my blog.

1. What is the first horror movie you remember watching? 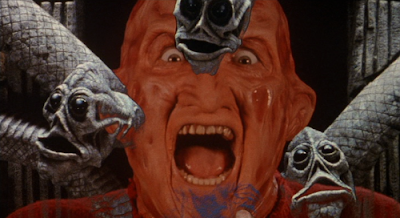 It's hard to pinpoint the exact film that introduced me to the genre, mainly because my mother was a big horror fan at the time. But one movie does stand out for me, and that is Freddy's Dead The Final Nightmare. I was only 6 years old and I remember going to the movie theater with my mom to see it. She still argues to this day that she didn't take me, that it must have been my brother, but I know better. We got to see it in 3D and I remember being both scared and amazed at the fire coming out of the screen. This was a time when 3D was actually special, not something you could experience every day. It has always been a very memorable moment for me. Freddy Krueger is definitely the first face I remember when it comes to horror.
Probably part of the reason why he's one of my favorite characters of all time.

2. What is your favorite horror movie? 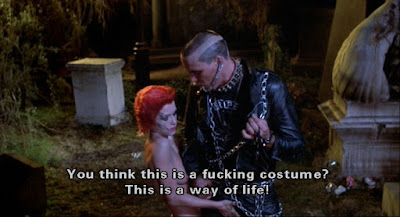 Sorry, guys.. but I'm going to cheat on this one. I really don't think it's fair to ask a movie lover to pick just ONE favorite film. There are so many that I absolutely adore. As you can tell from the first question, I'm a big Nightmare on Elm Street fan. The original is definitely one of my favorite horror films, along with others such as The Lost Boys, Dead Alive, The Return of the Living Dead, and Basket Case. Most of my faves are from the 1980s, if you haven't noticed a theme yet.
But then again, what horror fan doesn't love the '80s? ;)

3. What is your favorite horror sub-genre? 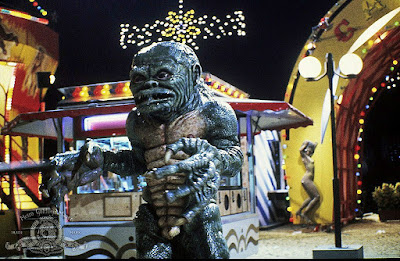 Again with the tough questions. I don't like picking just one! I guess since it's my blog I can make the rules. I'll go with my top 3 favorite horror sub-genres. Those would be:

Speaking of creature flicks, I wish I saw more of them these days. Everyone is so busy making these new age possession, torture films, etc., that the simple fun of a good monster movie has been forgotten. Everyone just wants to "push the envelope" and see how fucked up they can be. Call me old fashioned, but I don't care for it at all.
I like a good scare as much as the next person, but I also like some laughs.


4. What (sub)genre scares you the most?

Refer to the previous question. Possession/torture/demonic horror. Maybe it's my religious roots, but I typically don't enjoy these types of flicks. Except for The original Exorcist, of course. Mainly because it's comical to me, plus Linda Blair was just adorable. I don't know many people who aren't fans. A few others I dig are Dario Argento's Demons, The Evil Dead, and films along those lines. When I was younger I could tolerate this type of stuff better, but now it just seems to get under my skin. And frankly, I think it's being overdone. I would love to see this trend to die out.
THE POWER OF CHRIST COMPELS YOU!

5. The last movie that actually scared you? 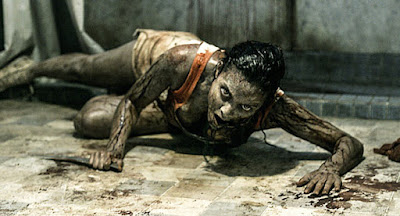 It takes a lot to scare me, it really does. And I know some of you big and bad movie watchers may not have been bothered, but Evil Dead (2013) was one of the only few films to really freak me out in quite some time. Don't get me wrong, I thought it was brilliantly done. I would be lying to you though if I said I've watched it more than twice. The first time I saw it in theaters, and the second viewing was when I bought the dvd. Just not something I want to turn on very often. 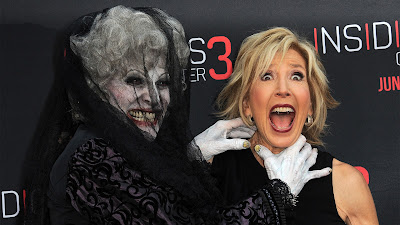 Hands down, Lin Shaye. All you young kids out there probably only recognize her from some of her recent appearances in films such as Insidious and Ouija, but this lady has been doing her thing for many years. She has starred in movies like A Nightmare on Elm Street, Critters, Dead End, 2001 Maniacs, Snoop Dogg's Hood of Horror, and Chillerama. Just to name a few. Her talent is truly endless. Sorry I didn't agree with most of today's horror fans and say Danielle Harris, but in all honesty, she just doesn't impress me much. Stone me if you want to, but I'll stick with ladies like Lin, Jamie Lee, and Sigourney any day over some these new chicks.
It's not about how sexy you are, it's the acting.

7. A concept that you'd like to see in horror?

Less remakes/reboots and more NEW ideas! I don't mean to bitch and moan, because some of these films I do appreciate for what they are, but every single day it seems I'm hearing, "Guess what's being remade next?". I'm just over it. Sure, it's neat to see an old movie done through different eyes every now and then, but it's gotten pretty out of hand. So I'd have to say, STOP THE REMAKE MADNESS! I'd also love to see more monster movies.
Not a new concept, but it would make me happy.

8. Your favorite on screen kill?

I have other favorites, but I'm going with the elevator monster attack from Cabin in the Woods.
I really don't think I need to explain why.

Yes, Freddy made it on my list yet again. I can't help it. It's like asking someone not to breathe. A Nightmare on Elm Street has always been my favorite horror movie franchise. I can watch these films over and over, and they never get old. Not to mention, it introduced me to the amazing Robert Englund who is one of my favorite actors. I can't name a film he's played in that I haven't loved.
His energy and sense of humor always steal the spotlight. 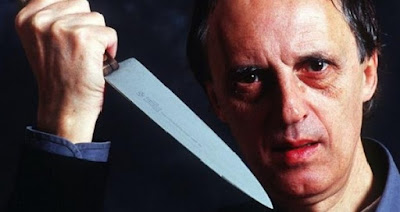 Dario Argento would definitely be my favorite director. I unfortunately was not introduced to his films until later in life, but his style quickly sucked me in. His beautiful imagery with an enchanting soundtrack to match are like no other. He's best known for Suspiria, Deep Red, Inferno, Phenomena, Demons, and more.
If you haven't checked any of these out I strongly suggest you do so.
It will be an amazing adventure.

Well, there's my horror movie tag.
I tag YOU to do the same!

Posted by Cinema Slime at 12:31 AM No comments: